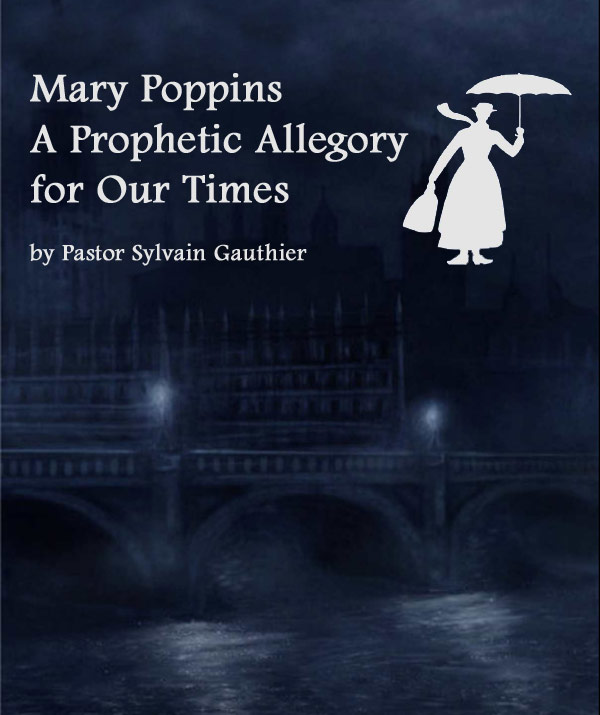 About a year ago I had a word concerning Mary Poppins. I felt that in many ways Mary Poppins was to be an important character in the coming years and the 1964 Disney movie had much to tell us about what the Lord was doing in this hour. So I took another look at the movie and the following is what I felt the Lord was telling me.

• Setting the Scene
In the first scene Mary Poppins is sitting in the clouds waiting for someone to call for help. We may think of her in the context of the movie as a symbol of the Holy Spirit. Then we see a character called Bert entertaining the crowd to get a few pennies. I think he symbolises the Church. Then the wind changes and his attention is turned to the heavenly. He starts to 'prophesy': 'Wind coming east, mist coming in, something is brewing and about to begin. I can't put my finger on what lies in store, I feel what's about to happen has happened before'. Then the Admiral says, "storm signal; choppy weather brewing there!" He is talking about Mr Bank's house. For me this speaks of the world banking and economic system in a difficult time. Mrs Banks is in the suffragette movement. She represents the different activists that we see rising up today in so many places. People are desperate for change, but many are looking in the wrong places.
When Mr Banks first appears he is in control and reigns over his world. He represents people and nations that think they are the master of their own destiny. As Mary Poppins appears in the picture, coming down from heaven, he loses control of just about everything. I have already noticed that many people I have spoken to over the last year are panicking because the life they thought they controlled is slipping from their hands...

• Mary Poppins Arrives
The first thing Mary Poppins does when she arrives is to make sure that Mr Banks knows that he will not control her. If we really want to be visited and transformed by the Holy Spirit we should give up trying to control or manipulate Him.
Then she goes into the children's room, 'the inner man', and cleans up the mess... I think that many now are desiring to make some room for the things of the Spirit in their hearts.
A quote from the movie goes something like this :

"When you are with Mary Poppins, suddenly you are in a place you never dreamed of and in a second the most unusual things begin to happen."

The change is enjoyed by most of the family except Mr Banks. He is opposing the change. Not a good position to hold when the Holy Spirit is around !

• The 'Feed the Birds' Song

The song about feeding the birds at Saint Paul's Cathedral resonates with me for two reasons. The first is that the Apostle Paul (the theologian of « living by faith ») describes in his epistle to the Romans a lifestyle that we need to rediscover. The second symbol is the bird, which reminds us of Matthew 6 when Jesus talks about the worries of life. He says that the first thing that should be in our minds is "seek first the kingdom..." One of the reasons things are falling apart is that we are valuing them above the Kingdom of God. The remedy is to realign our thoughts to the Kingdom. The way to this realignment will be difficult but the end result will surely make us wonder, "Why did I not do that before !"

• The Bank Rush
The episode at the Bank is the turning point in a few respects.
The father is tricked by Mary Poppins to include his children in his life and bring them to the Bank where he works. I saw that many parents would be having to talk with their children about the real financial, social, familial storm they are facing.
For those that do it properly it will bring healing and reconciliation in many families, where every member will take their place and play their part in carrying the family burden. Many parents with grown children at home that do not help much will benefit from this.

After Mary Poppins had touched the heart of the boy was faced with a dilemma about where he should invest his money. Matthew 6:19 commands us to invest first in the Kingdom... we should not follow the way of our earthly wisdom in this area, we should decide to believe in God. At the time I saw the movie I had a strong witness about a high risk of a bank rush. I felt that the system was so fragile that even a small thing could cause major trouble.
After the bank rush in the movie the kids run in despair and find Bert who rescues them and brings them home. The church has so many runaways that are trying to find their way home. They are about to cross your path, so what will you tell them ?

• Wisdom through Difficult Seasons
Bert looks at a dirty chimney and says it could be a "doorway for a place of enchantment "and with the help of Mary Poppins they even use the dark cloud to get closer to heaven. Those of us that have had to learn to rely on the Lord in the difficult seasons and struggles of life, will be asked by others for wisdom and insight into how to hear from God and trust in him. Just like Mr Banks who was in despair after his world had collapsed but was suddenly able to listen to Bert's advice and wisdom. In a short moment he was led to a conversion like experience where he knew what to do and how to take the difficult decisions that would lead to a radical change.

• The Prophetic Calling
Like many others who move prophetically I arrived at a point where I almost stopped giving words to people because most did not have the courage to respond. They lacked the faith to do the things that would lead to a real, lasting change in their lives. I felt at that point that it was a waste of time to share the insight of God with people. They seemed to have made up their minds to do their own thing whatever was said. However, I am in the repentance and recovery process in this area, like many of my prophetic friends.
The true prophetic is for one purpose, to restore the life of the family and of all people; isn't this what we are called to do with the help of the Holy Spirit ? (See Malachi 2:6)

The name and character of Mary Poppins have appeared so much in the news this last year that it is difficult to believe that the Lord did not want to attract our attention this popular story.